The World Health Organization has included air pollution among the top ten threats to public health in 2019.

What is Air pollution?

Air pollution can be defined as the process of various pollutants being dispersed into the air which lead to harmful effects on all living organisms and the environment.1 Pollutants include ozone, carbon dioxide and other noxious gases and particulate matter. There is a growing amount of evidence that airborne particulate matter causes several adverse health effects and leads to disease and even death. 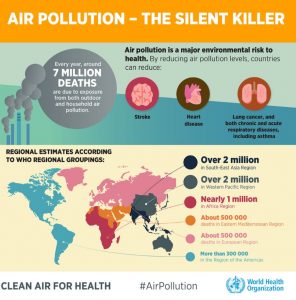 As specified by the World Health Organization, there is no evidence of a safe limit of PM exposure making it of utmost importance to reducing production and exposure to air pollution.

Sources of air pollution are mostly caused by human activities, including:2

Some measures that can reduce Air Pollution