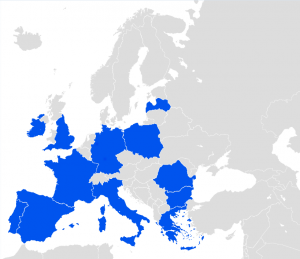 Tackling tobacco-related chronic diseases in Europe: Novel data from the Horizon 2020 TackSHS project reveals the results of exposure to secondhand smoke (SHS) from cigarettes and second-hand aerosols (SHA) from electronic cigarettes on the respiratory health of European population, the burden of associated mortality and morbidity, and economic consequences for national and European welfare.

These important findings were presented for discussion to a wide audience of about 100 European stakeholders during the Project Final Conference at the European Parliament on 8 October, kindly hosted by MEP Cristian-Silviu Buşoi and MEP Rosa Esteràs Ferragut.

Despite the tremendous effort to adopt and implement smoking bans around the European Union (EU) in the last decade, daily exposure to SHS among non-smokers is still highly prevalent across European countries. On average it affects 31% of population, ranging between 24% in Ireland and 68% in Greece, especially in indoor and outdoor settings of hospitality venues, workplaces, and private homes and cars.

What should we still do to protect the health of each and every European citizen, the health of future generation from this harmful exposure?

In pursuit of healthy populations protected from tobacco and second-hand smoke, as the title of the Conference stated, researchers from Ireland, Italy, Scotland, Spain and Greece had an honor of sharing key messages and recommendations deriving from 4 years of scientific studies under the TackSHS project. International audience of public health advocates, the EU and national officials and country representatives, academics, health care professionals, representatives of medical societies, public health associations and health-oriented NGOs, journalists and media – all the attendees joint forces in the discussion to further advance tobacco control and take necessary measures to protect public health.

After a welcoming word of MEP Bușoi, the Conference was launched with the presentations of Mrs. Thea Emmerling (Head of Unit, the Cross-border health care and tobacco control, DG SANTE, European Commission) and Dr. Francisco Lozano (President, European Network for Smoking and Tobacco Prevention) on the state of tobacco control in Europe and related policy priorities. The opening session was followed by a comprehensive project overview delivered by its coordinator, Prof. Esteve Fernández (Director, Tobacco Control Unit at the Catalan Institute of Oncology). 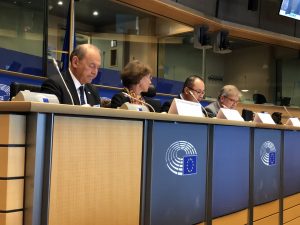 Daily exposure to SHS among non-smokers is highly prevalent in most European countries (31% overall, ranging between 24% in Ireland and 68% in Greece), especially in indoor and outdoor settings of hospitality venues, workplaces, and homes and cars.

Across Europe, three out of five smokers allow smoking in their homes, with very high levels of SHS exposure detected, potentially affecting children and other bystanders. In addition, SHS levels in cars of smokers are very high, with nicotine concentrations exceeding those observed in smokers’ homes.

The studies led to a conclusion that the burden attributable to SHS exposure is still substantial in the EU, mainly due to SHS exposure at home.  Only in 2017, among children aged 0-14 years, exposure to SHS at home was associated with 344 deaths (1.5% of total deaths in children) and 37,000 disability-adjusted life years (0.75% of total DALYs), whereas in non-smoking adults it was responsible of 30,000 deaths (0.6% of total deaths) and 712,000 DALYs (0.5% of total DALYs).

Furthermore, the annual cost of lost DALYs due to exposure to SHS is 356 million (of Purchasing Power Parity Adjusted euro of year 2017) on average in the EU 28 Member States. Differences around this average value are substantial. Germany is the Member State with the highest losses (1694.69 million euro) and Malta (10.55 million euro) with the lowest ones. Such differences reflect mostly differences in population size but also differences in the prevalence of exposure to SHS.

With regards to electronic cigarette use and exposure to their aerosols, the analysis demonstrated that the prevalence of use is low and diverse in Europe, more frequent among youth and usually concurrent with traditional cigarette smoking. The tests confirmed that electronic cigarette use impairs air quality with particulate matter, nicotine, volatile organic compounds, among others; while individuals exposed to electronic cigarettes aerosol showed immediate alterations of their lung function (respiratory mechanics and exhaled biomarkers) and experienced symptoms of eye, nose and throat irritation.

Project Consortium suggests the following measures for urgent consideration of the governments: