Lung cancer is the most common cause of death from cancers in Greece.1

Since smokers are considered a high risk population for lung cancer, the American College of Chest Physicians recommends annual low-dose CT scan screening for high-risk individuals (ages 55 to 77 years with ≥30 pack-year history of smoking and current smoker or quit within past 15 years).

In Greece, lung, trachea and bronchus cancers account for the 3rd overall cause of death in the country.1 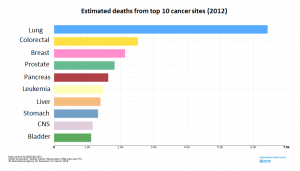 Lung cancer is the 1st cause, accounting for 31%, of cancer deaths among men in Greece, while in women it is the 3rd cause and accounts for 10%, respectively. However, this proportion in women is expected to increase in the future due to increased smoking prevalence among women in recent years.1 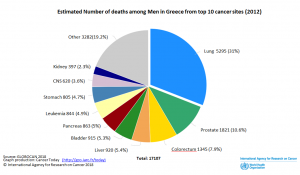 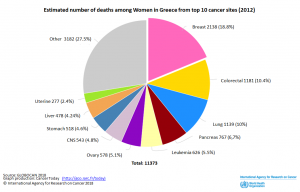 The Good News: Smoking is decreasing among youth in Greece!

Smoking prevalence has been steadily declining in Greece since 2009 especially among ages 16-24 years, old who have showed a 33% reduction in smoking prevalence from 2009 to 2014.5 This reduction supports the expectation of a reduction in lung cancer cases due to a younger generation which chooses not to smoke!